Warning: include_once(/nfs/c10/h07/mnt/227694/domains/wordpress/wp-content/plugins/wp-super-cache/wp-cache-phase1.php): failed to open stream: No such file or directory in /home/xmq4fzz9uyu2/public_html/wp-content/advanced-cache.php on line 22

Warning: include_once(): Failed opening '/nfs/c10/h07/mnt/227694/domains/wordpress/wp-content/plugins/wp-super-cache/ossdl-cdn.php' for inclusion (include_path='.:/opt/alt/php73/usr/share/pear') in /home/xmq4fzz9uyu2/public_html/wp-content/plugins/wp-super-cache/wp-cache.php on line 125
 Biography - HORROR BY THE SLICE
HORROR BY THE SLICEWant to Read Something Really Scary? 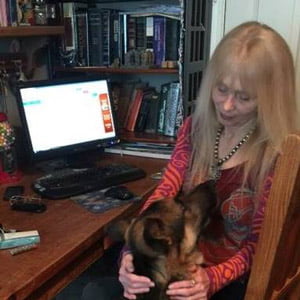 Writer…poet…designer…painter…seamstress and carnival gypsy…Sunni Ellis…a Nichiren Buddhist chanting for world peace and happiness… keeps a room in her best friend’s house in Nashville where she resides with her German Shepherd Jax and various ghosts. They keep the wolves at bay selling unique items at Motorcycle Rallies where she sews patches to motorcycle jackets…reading individual selections like Tarot cards…give a man a mask and he will tell you his story. This…combined with a childhood spent wandering the halls of radio and TV stations…seven years or so in Mexico…and a shifting soup of daylight and darkness to keep her up past midnight..when the moon is dark…as words stream across her laptop in a tumbling tattoo of tales. While some seek the Muse in minimalism…cold and pristine as the skin of Michelangelo’s angels…Sunni will be the one with an inflexible grip on a long wooden pole…anticipating the rise of the moon. A mind open to the universe would never dismiss the possibility of the moon as a pinata. After a bit of coercion involving the addition of a link to Cat bowling on the drop down menu and Godiva Chocolates…she agreed to share a few personal details –

*tap tap*…Is this thing on? It is my belief that Life can be reduced to two things…Love and Fear. My father made a side investment in a laundromat when I was a child. Once…in the parking lot.. I saw him stand up to an armed street gang…barehanded… and walk away. He received a flag from the White House on more than one occasion and was away from home a lot. As he was tight-lipped about his line of work…we secretly assumed he was a spy. My Aunt Sade took down a charging mountain lion with a rifle while riding full gallop on horseback and my Uncle Jack was the drummer for the Hot Hot Hottentots. Let’s see..oh yeah..my Aunt Ruth was born with a caul covering her face..which they removed and kept in a small black velvet box. As a child she could locate missing items and tell you exactly what was on your mind. After contacting Scarlet Fever at 13..the caul…which had never lost its vitality..withered…along with her “gift”.

My mother was a District Court judge who once ran headlong toward a line of Oklahoma tornadoes…blacking out horizon…to rescue a cat. Her Father immigrated to Quebec from France…migrated into Ohio…and married my grandmother… the daughter of a prominent German doctor. She was promptly disinherited for marrying a Frenchman and eventually died from Tetanus in a charity hospital. The story goes…he refused to go on living without her…drank himself into a stupor…and smashed his car into a cemetery tree. However…a tall..muscular old man with long white hair and beard…dropped a tattered jacket on my sewing machine at a motorcycle rally in Nevada once. His English was poor and my French is nonexistent but I understood that he wanted me to replace a patch on his jacket with another he’d pulled randomly from the display. When I was finished…he grabbed his jacket and left..leaving the patch I’d taken off…behind. It was a crest with a large wolf’s head in the center…the gold banners around the edges were written in French and Latin. Business picked up so I dropped it in a drawer to study later. When I went back for it after work..it had vanished. I find it hard to shake the feeling that I had met my grandfather.

My ex is still on my “friends” list…and I suppose my personal favorite in a laundry list of alibis would be..”.I was having lunch in Oaxaca with Edgar Rice Burroughs.” True love eludes me but I remain a believer. For those interested in knowing more about me….there is a bit of me in every story I write.